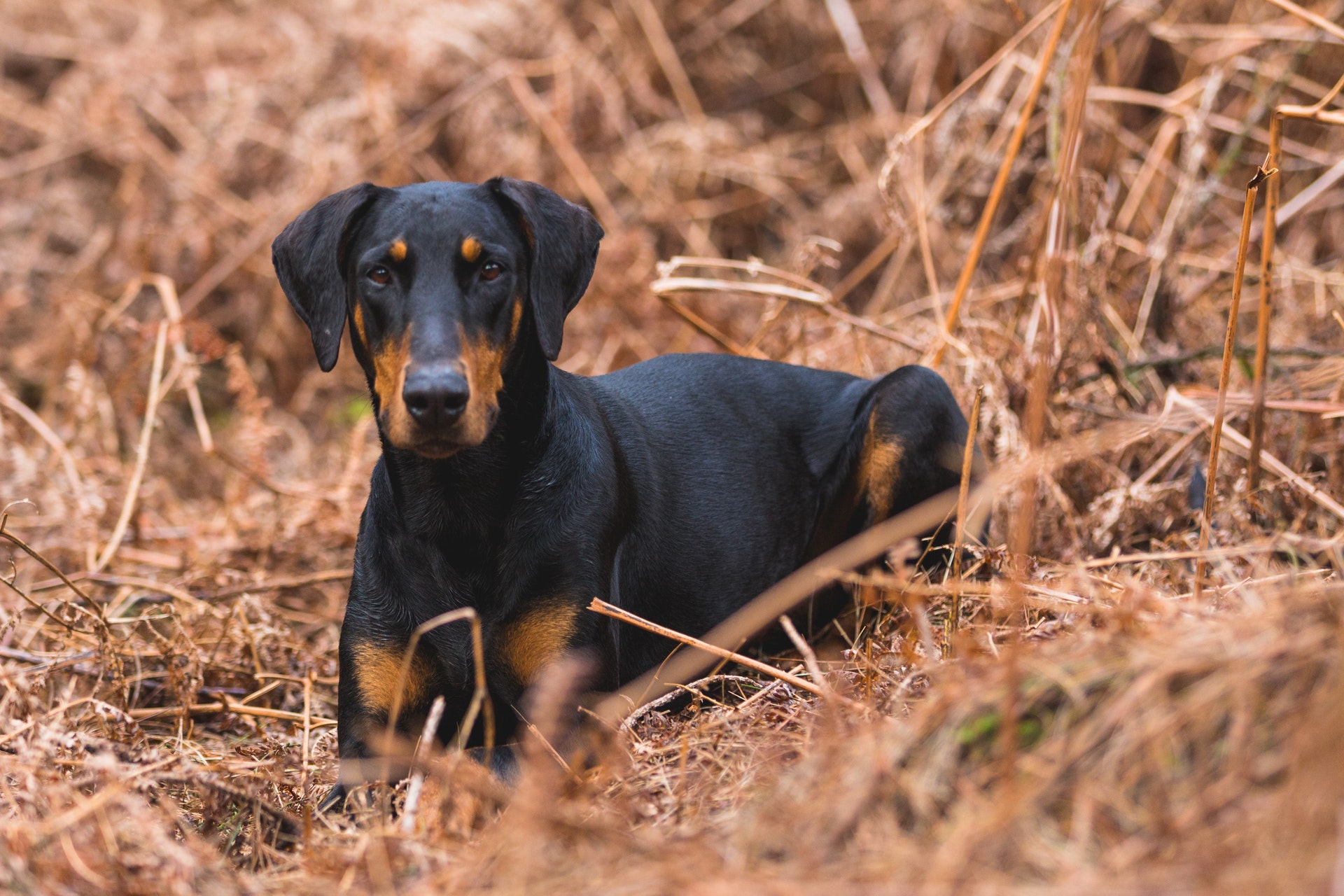 A Doberman with small Dogs? Dobermanns are large and strong dogs that are heavy, and when made to live with a small dog, can cause problems. These problems are not done on purpose, but accidents happen. So, when the discussion came about making Dobermanns live in the same house as small dogs, I had to consult some of the dogs, Dobermann, and the small breed owners.

After getting their reviews, I concluded that it is not that difficult to make them live together. You have to train them well, and they both will get along great.

The issue is that if you bring a Dobermann puppy to your house, both the dogs will grow together and have the habit of living in the same house. But when you bring an adult Dobermann, it is better not to leave alone the two dogs. In case, while playing, Dobermann rolls over, and a small dog comes underneath him, this might hurt the little one, but if both of them are the same size, then there is no problem.

While Dobermann is living in the house and bringing a small breed, problems might occur because Dobermanns are a little possessive and do not like to share their space and owner with any other dog. So, this whole problem boils down to training your dog in the best manner so he can tolerate the new pup at his home.

The good news is that Dobermanns do well with small dogs, and they have a friendly demeanor. They also are very intelligent and will quickly learn whatever you teach them. They also like to please their owner and to do that they will become friends with the little one easily. It just depends on the owner’s behavior and training.

What makes some people successful in making their Dobermann live with small dogs, and some people fail in this? Now grab your notepads and pens and write down the points I have narrowed! These are small things that will make a huge difference and bring a different outcome.

Small breeds that are Dobermann compatible

Every dog has its nature and temperament, so it is better to study their demeanor and then choose a certain dog to pair with Dobermann. Do your research and then finalize the breed you want in your house.

1.Make sure there is an age difference between the two breeds.

2.Get dogs of the opposite sex.

It has been observed that dogs of the opposite sex get along way earlier and better than dogs of the same sex. Even if you want to get dogs of the same gender, then get both females. But if you go for both male dogs’ chances are you will be in a problem. The male instincts will cause both dogs to show dominance over one another and the house, which is not good for your peace of mind as they might get in a fight.

Even if you opt for the male dogs with the age difference, the puppy still has to grow, and when he matures, he will fight for dominance, which is not safe.

3.Make sure to separate them at feeding time.

All dogs are aggressive when it comes to food, and especially large dogs have the advantage over pawing or pushing away small dogs. They do not like when someone gets near their food or, better yet, tries to eat their food. It is possible that the small dog was not trying to eat from Dobermann’s bowl but accidentally bumped into him, then he might get hurt badly.

It is better to keep them away at feeding time to eat peacefully and fulfill their hunger without you being worried about any incidents to happen.

4.Allow them to play only when a small dog is old enough

One of the major issues is the playtime between both the dogs. It is not safe for the puppy to play with an adult Dobermann because playing with a small dog can hurt. It is safe to keep both dogs away until the puppy gets old enough to know how he will protect himself from harm.

Yes, they can play if the scenario is opposite that the Dobermann is a puppy, and the small dog is already in the house. But in the above case can be life-threatening for the puppy. One nib or rolling over of your adult Dobermann can lead to the death of the smaller ones. So put the puppy in its crate or any other secure area beyond the reach of Dobermann while he is playing.

Train your Doberman to listen to your command before you bring the new one home. Dobermanns are natural predators and see small furry animals as something to hunt on. If they try to harm the little ones, make sure he understands your “leave it” command. So, then the Dobermann will leave the puppy and walk away. You have to be cautious even if he growls at the puppy and command him in a firm voice to know that he is not allowed to harm the new pup.

6.Keep your Dobermann on a leash during initial meetings.

This will not be necessary when the two get used to each other, but it is safer to keep your dog on a leash in the initial stage. In case he tries to attack the small dog, you can control him; otherwise, it might be too difficult to do that.

It also depends on your behavior and expressions; if you show an excited and happy expression when the small dog comes in front, it is guaranteed that your Dobermann will do the same. This happens because Dobermanns like to please their owners, and when they see their owner happy, they will automatically copy the expressions.

7.Keep them apart when you are not around.

Just to be on the safe side, it is better than you are also present in the room whenever both the dogs are together. But this practice is just in the beginning because you will never know what might happen.

Put one dog in its crate and the other in their crate or separate rooms etc., before leaving the house or going to another room. Just don’t leave the two alone. You will no longer have to worry about them being in the same room when they get to know each other well. But it is better that you don’t do it because if things go south, you will not be there to prevent the fight or any accident.

Use a barrier when introducing the two dogs for the very first time. This way, they can minimally interact with each other, sense each other’s smell, and see each other.

The best thing about this method is that you will be able to judge your Dobermann’s reaction and how he responds. If he starts to growl, then you might want to prolong the barrier-free interactions.

These were some of the points that I think will help decide the Dobermann owners or those who want to own a Dobermann puppy to make it possible for different sized breeds to live together. You just have to look at your Dobermann’s behavior if you already own one and plan to have a new dog. Anything leading to aggressive behavior should be stopped immediately, and you should take a step back.

It will take time, but your Dobermann will eventually accept the new pup in the house.

Follow us on Social Media and check out our latest posts

Training Guide for Doberman to walk on Leash

Male vs. Female Doberman: Which is better?

5 THINGS YOU NEED TO KNOW ABOUT DOBERMANS