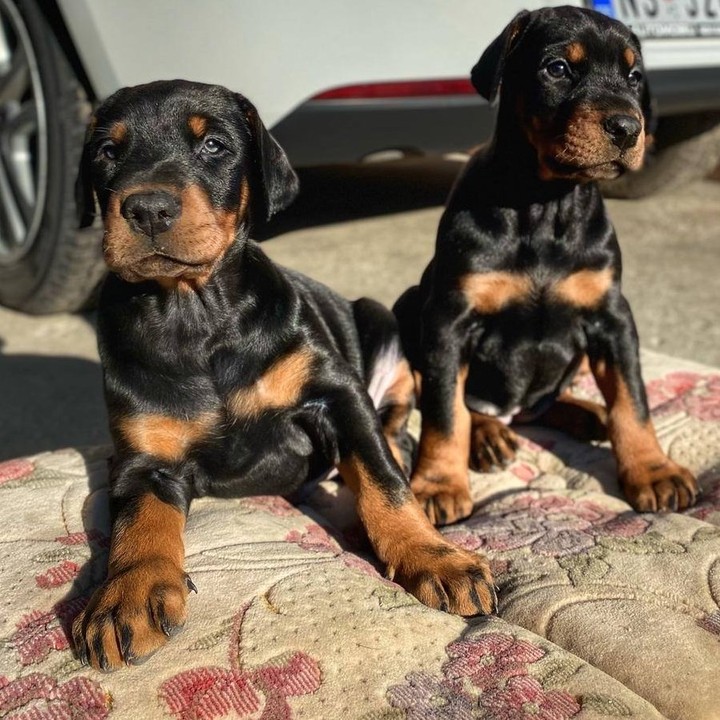 We know buying a doberman puppy could be tricky, especially when it’s is your first time. You need to know everything about getting a dog to be prepared for the expenses you have to bear.

If you are thinking of buying your dream puppy and if that lucky one is a Doberman Pinscher, you have come to the right place!

Doberman was initially bred in Germany in the late 19th century and is ranked in the top 20 list of most popular dogs in the USA. These dogs come in five colors, including black, blue, fawn, red, and white, with rust markings on different areas on their body.

Doberman is considered royalty in the canine world and would be the perfect dog friend to have! You would be wondering about the Doberman puppy price. Well, American Doberman could cost you anywhere between $1500-$2500 while the European one is a bit expensive and can cost between $3000-$4000.

There are many things to consider if you plan to buy this dog, like the puppy’s price, food and supplies, medical cost, training, and much more. Here we would take you step by step about the total cost of owning this dream dog of yours.

Getting Your Doberman Pinscher Pup

If you have made up your mind and are planning to buy a Doberman puppy, then the first thing to consider is how much its pup will cost you. Doberman puppy price starts from $500 and goes on to somewhere near $4000.

You need to keep in mind that if you are getting a Doberman Pinscher pup below $1000, there is a good chance that it might be of subpar quality.

Many factors affect the pup’s price, like bloodline, the breeder’s reputation, buying from an accredited kennel club, etc. All these factors significantly impact the Doberman puppy price and decide what your final cost would be.

Here are some of the factors that have a considerable impact on the price:

Bloodline could be a game-changer when it comes to price. If the pup you are buying comes from a champion bloodline, it would cost you substantially more.

Buying from an Accredited Kennel Club

If you are buying a certified purebred pup from an accredited kennel club, it would cost you more. If only the pup’s parents are certified, in this case, the price would be lesser.

The Reputation of the Breeder

The reputation of the breeder also plays a vital role in deciding the Doberman puppy price. If the breeder is a well-reputed one known for producing outclass litter of pups, then there is a good chance the price of the puppies will be high.

Other factors like ear cropping, tail docking, dewclaw removal, disease testing, and vaccinations will increase the breeders’ expenditure if they decide to go with them. So, when you buy a Doberman puppy with these features, you would have to pay more.

Breeders and Their Types

Another aspect worth mentioning that affects the price of the pup is the type of breeder. A reputable one would charge more for a pup, while a common breeder would ask considerably less.

Here is a comparison between the three different types of breeders and the expected price range in which they offer a Doberman Pinscher pup:

Dobermans coming from puppy mills are the cheapest source of getting a puppy, but it is highly unrecommended. Puppy mills are dog breeding facilities that churn out puppies in high-volume with the sole purpose of making money.

Both the mothers and the puppies have to bear inhumane conditions with no regard to their needs. This harsh treatment causes the pups to turn out unsocialized and often with certain health conditions. These pups are stuffed in a cage from the start and hence aren’t house trained. Getting them, you would need to consider that these pups would take more time to adjust than the puppies coming from reputable breeders.

You could get a Doberman Pinscher from a puppy mill between $300-$600. If you are planning to buy from a puppy mill, then you should reconsider your decision. Though you would be getting a Doberman pup cheap from here, but it would cost you more in the long run due to the hefty vet bills and dog training regimes.

This is another source from which you could buy a Doberman puppy at a low price. The average price that you get from a backyard breeder is $500-$1000.

Backyard breeders is a term used to describe the people who don’t do this for a living but end up selling their puppies due to an unplanned canine pregnancy.

These breeders might also deliberately allow their dogs to get pregnant just to give it a try, while others may be doing this for the sake of money. The main difference between a reputable breeder and a backyard one is that a reputable breeder meets breeding standards and breeds only when there is a demand.

Reputable breeders are the ones who breed dogs for a living and put all their efforts into producing a show class litter. These breeders are particular about meeting standards and follow the best practices for breeding. They only breed when there is a demand for the puppies they bred and often ask many questions to ensure that their pup is going to the right home.

Such breeders tend to participate in shows and competitions, to make their reputation even better. They get their pups tested for common diseases and provide kennel club certification papers to make you feel rest assured that you are getting the real deal.

If you plan to buy a Doberman puppy, we recommend buying it from a reputable Doberman Pinscher breeder. Doing so could cost you between $1500-$2500, but it is worth the price.

If you are a bit short on the money and still want to get your dream dog, then you could go for adoption. You could adopt a Doberman puppy from a Doberman recuse center. These shelters conduct visits to make sure whether you are a good fit for their dog or not. They often require three references to ensure that their dogs are going to the rightful owners.

Adopting a Doberman Pinscher could be a wise decision and beholds a lot of benefits. To start with, the act of adoption itself is a noble deed because you are saving a life from being euthanized. When you adopt a dog and welcome it into your home, you save a life and make room in the shelter for another pup who might need it more.

If you adopt a Doberman puppy, you will save a substantial amount of money. The dog that you would get would be well-trained and fully vaccinated if it is a mature one. It would have gone through veterinary examinations and behavioral assessment routines to make you feel rest assured if you have children at home.

While adopting you have a choice to choose a puppy, an adult dog, or a senior one. To top everything off, you also have the option to foster the dog before making your final adoption decision.

When adopting a Doberman Pinscher, you would have to pay a donation or an adoption fee between $50-$300 to a rescue center to support their shelter work.

What are the Additional Costs of Owning a Doberman Pinscher?

If you plan to buy a Doberman puppy rather than an adult dog, it would cost you more because a pup comes with many extra costs.

Purchasing or adopting a Doberman pup (male or female) is not just it; other costs are associated with dog ownership. You need to be well prepared for these additional costs so that you don’t get caught off guard when these costs present themselves.

If you are getting a puppy, the initial sum that you will be spending on it apart from buying the pup would be substantial. You would need to spend a good sum to crop its ears (about $800) if they aren’t already cropped. Getting it vaccinated and taking it to a vet for regular checkups is also going to cost you a lot. You would have to get the top-quality dog food to provide your puppy the best start and also some other supplies to make your pup settle down into its new home.

Doberman Pinscher is a large dog and is considered royalty in the canine world, so obviously, its expenses will be higher. Here is a list of the expenses you would have to bear after you buy a Doberman Puppy.

These additional costs are approximations and are intended to give you a general idea of the expenses apart from buying a Doberman Pinscher pup.

Expenses After the First Year

You might be wondering that does it get any better after the first year of hefty expenses. Well, it does; most of the expenses that you are going to bear would be one-time only ones. After the first year, things would start to get more streamlined and easier on the pocket.

According to ASPCA, the yearly cost of owning a dog after the first year is $875 for larger breeds. Since Doberman Pinscher is a large dog and is considered a medically expensive canine, it might cost you around $900-$1200 per year after the first one.

The answer to the question of how much does a Doberman Pinscher puppy cost depends on where you buy the pup. The cost would vary depending upon whether you buy from puppy mills, backyard breeders, or a reputable Doberman breeder.

It is recommended to buy from a reputable breeder because it would give you peace of mind that your pup is well-bred, healthy, and social. If you plan to adopt a Doberman puppy, it would considerably reduce your overall cost. You would just have to pay a minimal adoption fee to support their shelter work.

After getting a puppy, you would have to bear many additional expenses. The cost of a Doberman pup’s ownership would be substantial for the first year and would become easier on the pocket for subsequent years. If you are a Doberman fan and are financially stable to support all its expenses, you should go for it without wasting any time!

5 THINGS YOU NEED TO KNOW ABOUT DOBERMANS

10 Things You Need To Know before getting a Doberman.