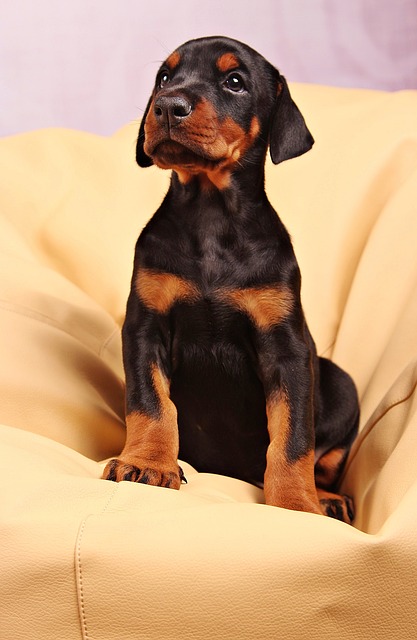 Whenever a person decides to own a pet, it is difficult for him to decide which dog breed to own and then be male or female puppy. Some people are easily scared by the thought of owning a male Doberman and some think more care is required for a female Doberman. This decision is difficult, but that is the reason I am writing this article for you people to make an easy decision and better yet the best one.

In my previous article, I told you about male vs. female Doberman adult and which is better to own, so now in article, I will talk about the Doberman puppy. So if you are interested in getting an adult or puppy Doberman, you have all the information you are seeking. In previous articles, we did an puppy price analysis.

On average, the newborn baby weighs about 10 ounces to 20 ounces. They have tightly closed and creased ears and eyes closed when they are born. They need to feed and nurse in small amounts after every 1 to 2 hours. It helps them get nourishment, grow properly, and enhance their metabolism. Their growth rate is high, and they gain steady weight throughout this phase of growth, that is, the span of their life’s first 12 months. The tails should be docked, and a Veterinarian removes the dewclaws when they are 3 to 5 days old.

It would be best to give your first vaccination at the age of 6 to 7 weeks to the puppies. The common vaccines administered are for Parvo, which is a common ailment of dogs and young puppies showing signs of diarrhea mainly. This disease causes high mortality rates in young puppies, so it is imperative to vaccinate young puppies. Like Parvo, Distemper is also a common ailment; both are highly contagious diseases, and the pups usually do not survive due to dehydration caused by diarrhea and vomiting. At the age of 7 weeks, the pups have grown a bit, and they take four meals a day on their own. This allows them to keep growing. At seven weeks age, ear cropping of the pup is necessary for a proper veterinarian.

During the first 1 to 2 years of a Doberman’s life, they grow at an incredibly fast rate. This rapid growth is tiring for a young puppy and is the biggest reason they need such a large amount of sleep early on. At about eight weeks of age, a Doberman puppy needs around 18 to 20 hours of sleep every night.

Male puppy: Male puppies are more energetic and playful. They tend to be extra alert and are ready to play most of the time. Thus, when they sleep, they take more time to wake up, usually 17-19 hrs. The average sleeping rate of puppies is 10-12 hours, but this breed requires more sleep because of their high activity levels.

Female Puppies: Female puppies are playful as well but do not require that much time to sleep. They sleep at the average rate of 15-17 hrs. But later, after growing, their sleeping time reduces and comes down to 12-14 hrs.

For such long hours of sleep, these pups are only dozing when humans think they are sleeping. It is in their genetics to stay more active even at the time of rest. They might even wake up when a car passes by or any voices they hear in the middle of the night. So, it is very important to make sure that they get a peaceful sleep at night; otherwise, they may get cranky.

Male puppy: Doberman pinschers frequently attain their adult heights when they are around a year in age, although some exceptions do occur. They also develop thicker bodies during this time. Male Doberman pinschers sometimes even approach some additional height during this time frame, although not a lot. Big male dogs are similarly lethargic as females regarding reaching reproductive maturity. It occasionally takes them 15 months to achieve sexually mature status.

Female puppy: Female Doberman pinschers usually get near their adult heights while between 7 and 12 months in age. Their bodies, however, tend to keep developing — and gaining a little more thickness — until they are about two years old. Doberman pinschers are slower than smaller pooches in the sexual maturity department, too. It sometimes takes females of giant breeds up to 2 to go through their initial heat cycle.

If we talk about adult Dobermans, yes, the difference can be seen when analyzing them. But in pictures, they look almost the same. The difference comes in their height, weight, looks, etc.

But talking about Doberman puppies, no such difference is observed as they both look cute and chubby. Although male puppies slightly weigh more than female puppies.

Male puppy: Although no temperamental issues have been observed at such a young age, the male puppies are more playful and do not mature until four. They like to run and seek attention from their owners. These little ones are a little messier and tend to get more excited with children around, so special care is required when left alone with kids. Because of their carefree nature, they learn at a later stage of their lives than females Dobermans. This means you will have to work more and with patience with male puppies.Female puppy: If you are about to get a pet for the first time, I recommend getting a female Doberman and, better yet, a female puppy. These little ones tend to mature quickly and learn at a faster rate than male dogs. They listen and understand what the owner wants and will obey their every command. From a very young age, these pups will ensure that they please you, and they do so by obeying, but male Doberman puppies will do so by their cuteness.

Can a Doberman Live with a German shepherd?

Male vs. Female Doberman: Which is better?