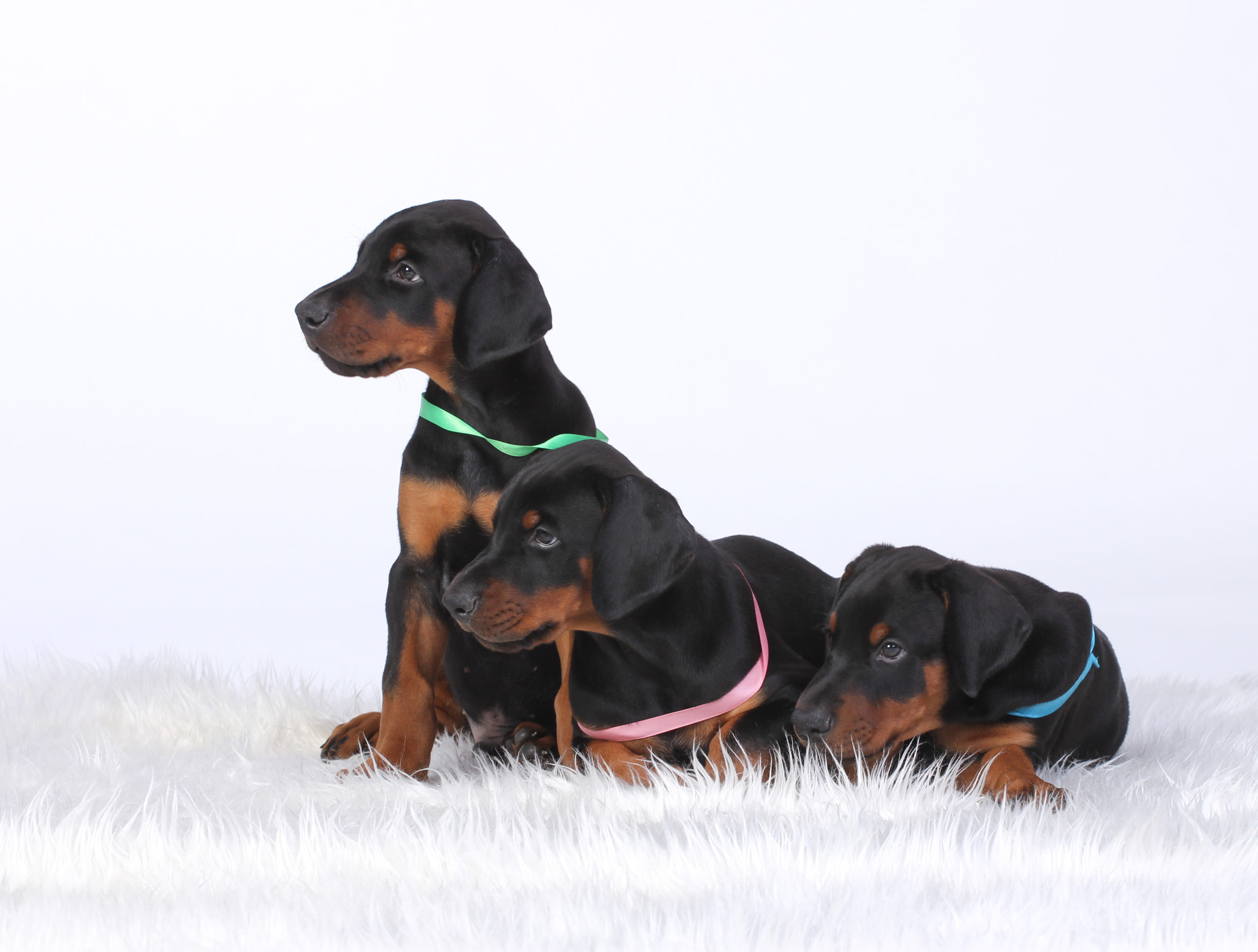 The Doberman is often referred to as the Doberman Pinscher, one of all dog types’ smartest. Since it was legally recognized in 1900, it is a relatively recent dog breed that has achieved tremendous notoriety. As a fierce, defensive security dog and an assault dog, it has a great reputation, which has culminated in numerous conclusions regarding the dog’s existence and temperament. Since the breed is initially created to be a protector, people often think twice when having one as a pet. Sometimes, they are known as violent, hostile, and harmful.

While they possess all these attributes to some degree, they only show them in times of need, care, or when they have to defend themselves and their owners. Dobermans truly make great dogs, and it is undoubtedly a special privilege to possess one. If you’re thinking about taking a Doberman puppy around, here are a few fascinating items you should know about this breed to have the safest possible home for them.

They Have an Average Lifespan of 12-15 Years

It is essential to remember their average lifetime before buying any pet dog. The typical lifetime for a Doberman is 12-15 years, which is perhaps the saddest aspect of having one as a pet.

The breed’s health-related issues and its vulnerability to a wide variety of infections and diseases are among the many explanations for such a short lifespan. This dog type is commonly considered very stable, save for a few medical problems, such as hip dysplasia, cardiomyopathy, persistent hepatitis, cataracts, and, to name a few, melanoma. Make sure it has been adequately tested for hereditary disorders before getting a Doberman pet to make sure you’re getting a good dog.

The White Doberman Has Great Many Health Complications

In a range of standard shades, such as black, red, fawn, and blue, the Doberman breed exists, although there is also a ‘white’ or ‘cream-colored’ Doberman, which is very uncommon. White Dobermans are not as common as other colors, mostly because more severe health problems are involved.

The white Doberman is also explicitly identified because of their light coloring as ‘albino Dobermans.’ In the conventional context, while they are not albinos, they have white-colored marks on their coat, eye pigmentation, pink cheeks, and a pink nose. This dog breed is particularly vulnerable to cancers, sunburn, photosensitivity, loss of vision, and various skin issues due to their decreased pigment amount. The American Kennel Club (AKC) strictly does not encourage white Dobermans’ reproduction for these same purposes, contributing to the white Doberman being treated as an “unacceptable specimen.”

They aren’t as Aggressive as you think.

When they think of a Doberman, most individuals get the picture of a snarling dog with flared nostrils and pointed, bare teeth. While they have an imposing look, it’s merely because they were raised to defend themselves and their owners as security dogs.

Their system of breeding is partly why they come off as fierce and violent. They are raised very differently, though, nowadays. This generation’s Dobermans are friendly, sociable, playful, and have a relatively even disposition. Their former dominance characteristics and attributes are intensely toned down; nevertheless, it is necessary to remember that they do have the capacity to exhibit a tad violent behavioral propensity than most other dog types.

They Have a Superior Kind of Intelligence

Since they also have excellent intuition and innate skills, guard dogs are considered very creative and fast learners. The Doberman is one of the smarter types of dogs, and they have been rated as the 5th most intelligent dog breed in the world by the American Kennel Club.

Their cleverness means that they are quick to teach and have a strong desire to acquire new techniques and activities. However, remember that they seem to get bored very quickly, so they still require some variation and complicated and engaging activities.

They are incredibly Demanding, and They Crave Serious Attention

Dobermans may be beautiful friends, and with your pet Doberman, you’re sure to have a whole lot of fun. They are an incredibly tough breed of dog, though, and they warrant very considerable care from their owners. The fundamental premise behind this term is that, relative to many other dog types, Dobermans demand affection and involvement from their owners and have very stringent inclusion criteria.

As a pet owner, you need to emotionally brace yourself because, with their extreme demands for attention, compassion, exercise, and concentration, your beloved Doberman will cause you a tough time. You need to make sure you have enough time on your plate to provide for these dogs before taking one home as a puppy and that your everyday life is not too busy.

Another crucial factor to keep in mind is that accompanied by a great need for comfort, Dobermans appear to develop rather severe connections with their masters. Therefore, the sort of time and care that they want you to offer them, you must be willing to give your Doberman pupüy.

Most individuals are accustomed to seeing Doberman Pinschers’ black variant and are thus oblivious that there are three other options. Black, red, blue, and fawn shades are the potential colors.

There are two separate pigment genes in a Doberman: black (B) and color dilution (D). In each of these breeds, the entire assembly of genes is represented as XXYY, where X denotes the black gene (B), and Y means the gene for pigment dilution (D). Therefore, BBDD, BbDD, and bbdd are a few instances of assembly. A capital letter such as “B” indicates that there is a dominant allele (gene variation), whereas a simple letter such as “b” means that there is a recessive allele.

A Doberman Pinscher requires nearly constant grooming. Even if you can afford to have this done professionally, after sending the dog off to a stranger every day, don’t expect the best possible relationship. The first aspect of grooming is the daily removal of what is known as “eye boogers.” After sleeping, Dobermans produce a normal eye discharge every day. Wiping the affected eyes outward with tissue is all that is required.

Ears are the next area of grooming. Looking into the ears helps you to identify specific health problems as they occur, in addition to keeping your dog clean. If needed, this allows you to take the dog to the vet. With a cotton ball, the external ear flaps should be cleaned daily. It can be disastrous to attempt to clean the ear canal.

The next area of focus is dental hygiene. Like that of the ears, the cleaning process provides you the opportunity to familiarize yourself with what is normal for your dog. It would help if you had specialized toothpaste for dogs and an appropriate toothbrush for dogs. Only brush the outside of your teeth back and forth.

Coat care is also critical. Your dog should be offered an occasional bath with a moisturizing shampoo. It is also necessary to comb the suit since it eliminates excess fur. The smooth, straight, flat coat of a good Doberman and they still have absolutely no “dog” scent. Finally, since they need to be kept small, the dog’s nails will be trimmed on a three-to-four-week basis.

Training Success Is Achieved Through Consistency

Obedience is one element of the initial system of breeding that exists. Dobermans can be polite and compliant dogs, but the teacher’s consistency only understands this ability. Know, even the most obscure of specifics are detected by a Doberman Pinscher, which ensures that you ought to be compliant with compliance.

Obedience instruction involves the implementation of a guideline to be observed by the individual doing the same. The dog treats the same performance as an exception because it does not last until continuous training is performed. A Doberman’s acute intellect ensures that if it gets away with not observing an existing law even once, it knows. This is rendered much harder by remembering that you noticed the misconduct and let it slip. This indicates to Doberman that there are moments where it is possible to violate the rules.

There Are a Few Health Concerns to Watch out For

In the canine kingdom, Dobermans are spoken of like royalty, and one of the explanations for this is the breed’s wellbeing. These dogs appear to be in good condition, with stable vitals in general. Be it as it might, because the species is susceptible to them, there are some factors that owners ought to be mindful of.

The first of these is bloat, the more popular term used for volvulus-gastric dilation. This is a life-threatening situation that usually needs immediate care since a bloated dog can only have hours to live. Restlessness, stomach enlargement, retching, and moaning while the abdomen is squeezed include signs consistent with bloat.

Second, hip dysplasia in dogs is, on the more significant hand, which is a common skeletal disease. When a dog with this problem either has not formed the ball and socket joint in the hip, they do not match correctly. Therefore, the components of the joint rub against each other instead of gliding along with each other. A broken-down joint over time is the product of this, which may contribute to the joint being unstable. Hip dysplasia signs include a narrow posture, reduced physical exercise, decreased thigh muscle mass, hind-end lameness, and joints’ grating during motion.

A clotting defect identified as von Willebrand’s disease, an irregular heart (dilated cardiomyopathy), albinism, hypothyroidism, and atrophy is a disorder that influences Doberman’s. Although certain conditions may be detected through routine screening, trustworthy breeders treat those that, where necessary, arise at the puppy level.

They Are More than Just Pets.

Today’s Doberman pinschers are perfect for companionship. This can signify several things to you, based on your attitude. Finding a dog that spends much of its time in the kennel qualifies as having a pet among certain persons. For some, when the creatures are treated as family members or mates, their pets would be with them nearly consistently.

Given their wild and fierce behavioral habits, having a Doberman puppy may not be such a smart idea if you are new to dogs. If you are an accomplished pet owner, on the other side, you know all about their disposition and features; make sure you learn and do your homework before you carry one around.

You must note, though, that Dobermans make great dogs, and if you have one at home, you realize you are protected from harm, and Dobermans are genuinely fierce protectors, and at all times, they can guard you!

Training Guide for Doberman to walk on Leash